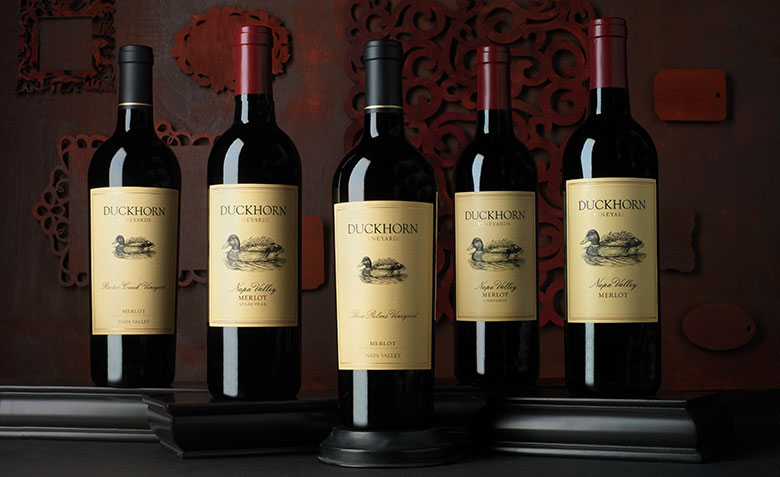 Here at Duckhorn Vineyards, our 41st harvest has come to a successful completion.  As we exhale, wipe our brows and take an introspective pause, reflecting upon our 4-decade love affair with Merlot is appropriate.  Today, Merlot is the second most widely planted varietal in the world. Merlot is the third most plated grape here in the Golden State and it leads the acres planted in Washington State as well as on Long Island.  Merlot is a regular and trusted choice for wine drinkers around the world.  However, when our visionary founders Dan and Margaret Duckhorn made the critical decision to focus their winemaking efforts on this grape, the wine was very minimally known.

Dan and Margaret became enamored of Merlot due to some enlightening travels they enjoyed in Bordeaux. They were particularly smitten by the wines they experienced that were made on storied Right Bank, specifically from the communes of Pomerol and St. Emillion. In those two regions Merlot is the dominant varietal and they both fell hard for the inherent smoothness, approachability, plushness and concertation displayed in the local wines. The seed was set: Duckhorn Vineyards would position itself as the preeminent producer of premium Merlot in Napa Valley.  Though many Napa Valley wineries were using Merlot as a blending grape in the late seventies, few were exploring the potential of this varietal as a stand-alone wine.

Ric Forman, a helpful local friend introduced Dan to the remarkable brother-brother team of John and Sloan Uptown, owners of the vineyard we consider our spiritual home: Three Palms Vineyard. Dan assessed this unique up-valley site to have the appropriate climate, soil, and drainage needed to grow the caliber of Merlot he wanted to put his name on. A deal was struck: the Uptons sold us the first bins of Merlot from which our founding Winemaker Tom Rinaldi created our debut wine:  1978 Duckhorn Vineyards Napa Valley Merlot Three Palms Vineyard.  Eight hundred cases of this wine were released sporting what is now one of the most recognizable labels in American wine. The use of the yellow paper and the ink drawing of a Mallard duck are recognizable elements of our brand identity today.

Making the wine was one thing, explaining it and selling it was another challenge all together. As Dan recalls in an interview with journalist and author James McClure typical responses from early customers were “What is this stuff” and regarding the mysterious varietal on the label “How do you pronounce it?”

Ambivalence in the marketplace did not discourage Dan and Margaret and their dedicated employees. Building on our role as the first American winery to pioneer luxury Merlot, we made our debut vintage of Napa Valley Merlot in 1979.  Today this iconic wine is a juggernaut, a popular and respected choice for American wine drinkers as well as fans in over a dozen countries we reach through our export efforts.

Our passion for creating world class Merlot benefited from the boom in Merlot sales that surged in the 80s and 90s.  We stayed steady, invested in new vineyard sites,  got better and better at our craft and emerged from a slump in Merlot sales in the 2000s as a true standard-bearer. That steadiness, dedication and single-minded adherence to quality was recognized by the Wine Spectator in December of 2017 when they chose our 2014 Three Palms Merlot as the Wine of the Year. We were all humbled a well as ecstatic about this powerful recognition.

Today, we continue to make our flagship Three Palms Merlot as well as the globe-trotting Napa Valley Merlot. In addition to those two “greatest hits” we’ve added four more offerings of terroir-driven Merlots that embody the unique characteristics of their growing site.  Any one of these terrific wines demonstrate quite deliciously why Duckhorn Vineyards is often referred to as “A Master of New World Merlot.”