A Look Into Washington State Wine 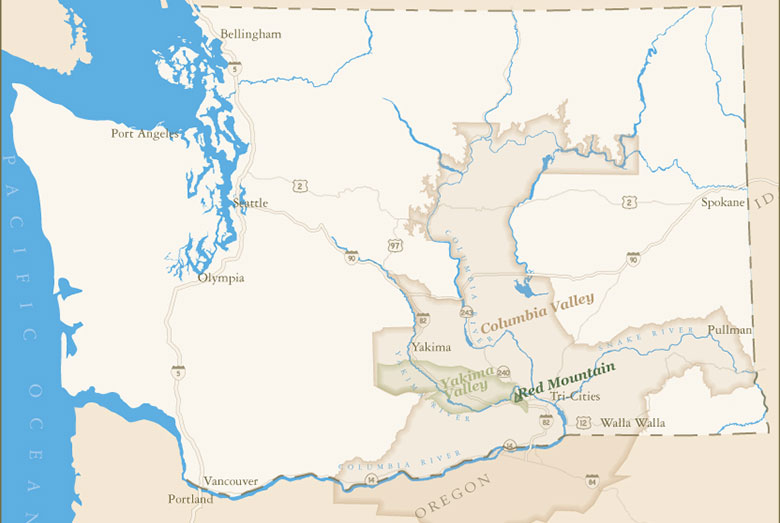 Washington State is the new frontier for luxury Cabernet Sauvignon. As a young and emerging wine region, there have already been eight wines to earn the coveted 100-point score from top wine publications. Let’s dive into what makes Washington perfect for wine growing.

Agriculture has long been a cornerstone for Washington State, with the farming of apples, wheat, potatoes and many other crops. The earliest signs of grape farming originated with traders at Fort Vancouver in 1825, and by the 1860’s, Italian and German immigrants were making wine. Fast forward to the mid 1970’s, when a few pioneers began planting vineyards and commercially crafting wine in Eastern Washington. These folks paved the way for Washington winemaking as we know it. Today, Washington ranks second in wine production in the United States, behind California. There are a number of factors that make Eastern Washington perfect for winegrowing: namely the geography, the geology and the climate.

Many people think of Washington State as the rainy state, which is quite true in Seattle and Western Washington, as storms roll in from the Pacific Ocean. Eastern Washington is a different story. This region sits in the rain shadow of the Cascade Mountains. So, moisture laden storms are blocked by the mountain range, resulting in an arid, desert climate East of the Cascades. At the same time, there are two major rivers that travel through Eastern Washington; the Columbia River and the Snake River which allows for wine growers to easily irrigate their vineyards.

Geography and location are influential factors in climate. Eastern Washington grape growing sits at a latitude of 46˚ N which is the same latitude of Bordeaux, France. At this latitude, the growing season sees an average of 17 hours of sunlight, which is 2 hours more than Napa. In addition, Eastern Washington’s desert climate also experiences extreme diurnal temperatures shifts, with daytime to nighttime temperature swings of 40 degrees. These long and hot daylight hours slowly and evenly ripen the grapes while cool evenings preserve the grapes natural acidity.

Soil and geology have a significant impact on wine quality. Eastern Washington features some of the most unique soil compositions. During the last ice age, around 15,000 years ago, a large glacial lake in present day Montana, flooded the Pacific Northwest with an 800-foot wave that travelled at speeds upwards of 60 mph. This event, known as the Missoula Floods, and is one of the most significant documented flood events on earth. In its wake, the flood completely changed the native landscape of volcanic rocks and basalt by depositing non-native granitic silt, sands and gravels. This unique soil diversity and excellent soil drainage make the vines work harder thus creating a lower yield and higher quality crop.

The world of Washington wine is young and up-and-coming, earning its place on the main stage of the international wine scene. Since wine is so intimately connected to place, we are taking a side-by-side look at two of our major Eastern Washington appellations.